We’ve covered how much I have loved renting and how having just one car has been beneficial to our family. Food was another major place for us to save money by living frugally.

Going into marriage, I knew my way around the kitchen. I could make basic things and some very fancy ones from 4-H projects.

But I wasn’t totally prepared for the day in, day out nature of feeding people–even when it was just Matt and I. In the dorms, I had a meal plan, and in my apartment…I often had queso and chips and called it dinner.

This would not fly with my husband, friend. He is a sweet, laidback guy who works really hard in all that he does–and in return, he asks for a good dinner and occasional backrub. How could I deny him those things?

When I was overwhelmed with all the dinner possibilities and the money it would take to make them, I came back to this basic 7-day meal plan:

This list doesn’t require great culinary prowess, but it does require a little basic kitchen knowledge. When there weren’t great deals at the grocery store or I was low on time, this is the meal plan I always turned to for the week.

Actually, I still turn to it. We still have spaghetti and pizza nearly every week, and I pretty much always have the ingredients for everything on this list in my pantry and freezer.

As I got more comfortable in the kitchen, the hotdish would be swapped out for tacos or salisbury steak. I’ve added plenty of dishes to my repertoire over time. I watched YouTube videos to learn how to dice onions properly or to debone a chicken.

And I turned to the Internet and fell down the ultimate Google rabbit hole: saving money on groceries. This was 2009-2010ish, when blogs reigned supreme. I was glued to my computer, learning how to pair sales with coupons and catalinas and scoop up groceries for pennies.

Some of the tactics I learned felt a little shady. Some required a lot of effort. Some of the food I bought then because it was cheap I wouldn’t buy now because it lacked any redeeming nutritional value.

But just as with the menu I come back to again and again, here are some of the money-saving tips from those basement apartment days that I still follow:

1. I keep a well-stocked pantry and freezer.

I said before that I can generally make anything on that original meal plan at a moment’s notice. I keep a steady supply of spaghetti noodles and sauce, other noodles, cream of mushroom soup, canned vegetables, canned tomatoes, ketchup, mustard, tuna, broth, etc. in my pantry and stock my freezer with meats, vegetables, bread, easy frozen entrees (like chicken nuggets or fish sticks), and ALL THE BUTTER.

Because I am well-stocked, I can make my meal plan for the week starting with what’s on hand and then build a grocery list from there. And because I keep a variety of items on hand, I can mix and match to create numerous dishes, not just the seven on my basic list.

If I pick up a few specialty ingredients, whether fresh or just more expensive than my usual fare, my basic meals can be elevated to something special without going broke.

2. I know the best prices for the things I buy.

When we first moved to Little Rock, I was floored by the higher prices. Not having an Aldi was a big adjustment, but with time I’ve figured out Kroger. I started bringing a list of the things I normally buy (see point #1 above) and writing down their cost/unit.

I did it long enough that I no longer need my list and have an internalized sense of what a good price is. That sounds like a lot of effort, but for the money we save, it was worth the investment of time.

3. I stock up on those favorites when they’re at their cheapest.

Butter goes down to $2.49 every 12 weeks or so throughout the year and $1.99 a pound around the holidays. I stock up as much as my budget or the store or my freezer allows.

Chicken I wait for 99 cents/pound or go to Sam’s Club or Edward’s Food Giant. Produce specials are usually in the sales flyer, though I check out what else is on offer to make sure we’re eating the cheapest fruit they have that week.

Because I make my meal plan based on what we have at home, I usually have wiggle room in my grocery budget for deals. I’m essentially always buying ahead, which means I’m able to buy what’s the cheapest instead of what’s on my meal plan.

This should go without saying, people. We popped into Kroger for Christmas lights the other day and I found 1-pound boxes of spaghetti for 29 cents. Scooped up five and saved 71 cents per box. I love a 70% savings rate!

Figure out where your favorite stores’ markdown sections are for produce, bakery, meat, and non-perishables. And if you’re browsing, watch out for markdown stickers. Kroger’s are red and yellow and say “woohoo!” on them, so my kids are eager “woohoo!” sticker hunters.

I used to spend a lot of time cooking and baking. It fills time with little ones and can be a good way to occupy them and bond at the same time.

These days, I get out of as much cooking as possible while still balancing nutrition and keeping the budget low.

In this season, that looks like nixing cereal and milk (expensive and my kids are hungry an hour later) in favor of scrambled eggs, sauteed spinach, and toast. It costs about a dollar per breakfast for four people (Matt doesn’t do breakfast) and gives my kids practice in the kitchen, mastering a simple meal.

Lunch is often “snacky”: we aim for a fruit and vegetable along with an easy main that provides good fats and protein, sometimes with a starch and/or a small treat. My helper for the day often helps “make” lunch by assembling items from all of the categories, already knowing what those categories are. I love that they’re internalizing the components of a well-balanced meal–and that it doesn’t require much effort. We might make bologna sandwiches or pop in a tray of chicken nuggets and assemble them with our produce and that’s it.

There’s one snack in the afternoon in our house. I stick to sweets that I can buy for $1 per pack, like fruit snacks when they’re on sale or a bag of marshmallows. They’re allowed a small sweet or chips and then can fill up on produce or nuts if they’re still hungry, though I scoot them out of the kitchen pretty quick with reminders not to spoil their dinners.

The dinner rotation is bigger than the initial 7 I shared above, but there are still a lot of repeats and nothing gourmet or overly involved. As the kids get bigger, we’ll work on mastering our current easy meals and hopefully turn them into eager chefs who can whip up (and clean up after) all manner of delicious, fancy dinners.

In the meantime, added to my perennial dinner stock-up list are all things breakfast and lunch: eggs, spinach, lunch meat, nuts, and cheap sweet treats. We usually have chips and chocolate around, though I don’t stock up on those because we just eat them faster when I do!

I don’t save as much money as I used to, mostly because there are bigger bodies to feed and we eat better than in our early years. Ben and Jerry make it into our cart on occasion and I still haven’t given up my Diet Dr Pepper. I use fewer coupons and spend less time in the kitchen. But I’m pleased with how well the Lord has provided for us and continues to do so.

What about you? What are your most important grocery strategies?

2 thoughts on “Saving on Groceries” 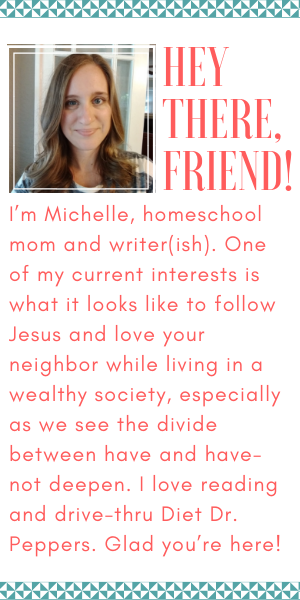 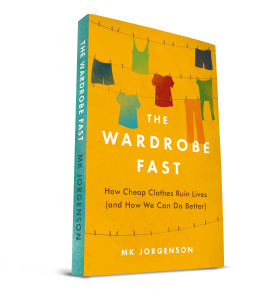 “Some have argued that the bloodshed and mistreatment of garment workers in developing countries is simply part of the game…But with history to teach us how exploitative industry can be, and the Bible reminding us to seek justice and love mercy (Micah 6:8), shouldn’t we demand something better?”

– From The Wardrobe Fast, now available on Amazon.